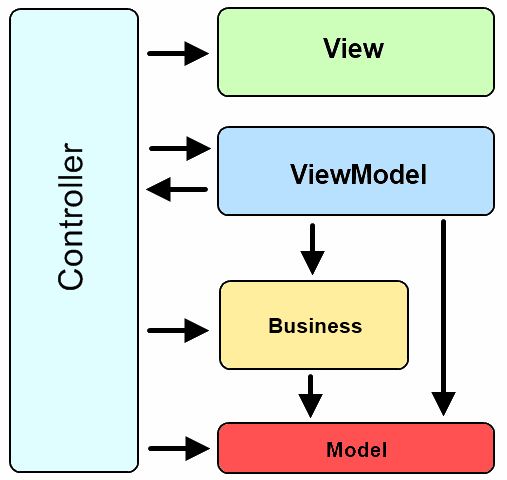 So the last project where I implemented MVVM that is in production for an enterprise product, the design pattern actually grew to included more than just the three items: Model, View, ViewModel.

Instead it looked like the image you see to the right.

How this design formed

Originally the MVVM pattern was used and the project started as a single project, with a separate folder and namespace for Model-View-ViewModel times.

As the application progressed, this design was created as separation of concerns were applied to each layer and as items were broken out into separate projects/dlls.

Why the Controller became a separate layer

So to keep the View decoupled from the ViewModel and visa-versa, a separate Controller project was created and no reference between the View or ViewModel was allowed.

Note: Actually the Business and Controller layers are in the same dll.

Why the Business layer was separated from the ViewModel

Initially the Controller was a single class, then we realized that it was doing about ten things, and was over 1000 lines. Oops. It was refactored into separate objects, some of which actually turned out to belong in the business layer.  So it appeared that we allowed the business layer to bleed into the controller. As the file was analyzed it was clear that a certain amount of methods and properties were only for a particular use and so these were extracted to a separate class. This was actually repeated multiple times for different uses, after which, the controller returned to just being a controller and it was a smaller easy to maintain class.

As the product continued to grow, other changes are seen as necessary even though they haven’t yet been implemented.

Separation of the Controller from the Business layer

View communication with the DataContext without binding

There arose instances where binding was not supported or did not exist. In many cases we used attached properties or an inherited object and added the missing bindings, however, in some instances this didn’t make sense. What if the View needed to send a message to the DataContext or pass and event to the code behind and neither inheriting the object to add the binding or using an attached property made sense. What made sense was an interface.

I recently posted an article on Creating an Interface for data binding in Views with WPF. Imagine a new layer that exists between the View and the ViewModel called IViewModel. Both the View and the ViewModel reference it and they still don’t reference each other. An interface in the IViewModel project/dll would mainly include properties that help the ViewModel know what is needed for binding. However, in such rare circumstances that it makes sense to communicate to the DataContext, the View can check if the DataContext implements an interfaces and calls a method the interface defines.